The Perfect Match by Kristan Higgins 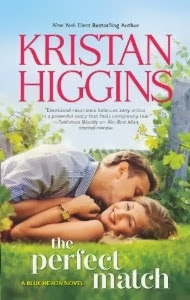 Honor Holland is the sister who lives up to expectations, the daughter her Father can rely on to look after the vineyard. She’s sensible, practical and hard-working, has been in love with her best friend for the last fifteen years, and can hear her ovaries shrivelling.

When the man Honor loves overlooks her, in favour of her best friend, she throws herself into the search for love, marriage and babies. Offered a green card marriage of convenience with English Man Tom Barlow, Honor decides she’s ready to move on from Brogan, and have a family.

What I Liked: I was wary going in to Perfect Match, after reflecting on her character in The Best Man. She was prickly, grumpy and somewhat unsympathetic until the end of Best Man, and I was concerned she wouldn’t become any easier to like.

I don’t know what I was worried about. Kristan Higgins wouldn’t throw an unlikable heroine at me, all her characters are wacky, quirky and remarkably likeable. Honor is stiff, confident and demands respect from everyone she encounters. She loves her family, loves her work, and loves her terrible terrier.

Tom was charming, if incredibly goofy, with a big heart who is perfect for Honor, forcing her to let her hair down and take a chance to have fun. He has his flaws, drinking, jealousy, and an inferiority complex.

My favourite characters in the Blue Heron series, are Pops and Goggy. Their tough love, argumentative nature and the general stubbornness – recognisable in anyone over 60 who refuses to acknowledge the benefits of change – make them both adorable and frustratingly familiar.

What I Didn’t Like: Brogan and Dana. Yueck. Worst couple ever. Worst people ever. I don’t see what the appeal is there at all. Brogan is selfish, egotistical (one of my favourite words), and arrogant. Yes, yes, he’s all smitten kitten with his new love but she’s horrid and if he prefers her to Honor then he’s stupid as well. Does his ‘charming’ and outgoing personality make up for his seriously oblivious nature? No.

Then there’s Dana. There is something to be said for having a friend like Dana, someone who isn’t worried about sugar coating things, and always has a comeback to a bully. Unfortunately we’ve all had a friend like Dana, a toxic friend who will happily turn on you when your services as a friend are no longer necessary.

The Perfect Match was a sweet romance about finding your place, and embracing your true self. I look forward to the third instalment of the Blue Heron series.